An investigation into allegations of misconduct by the (then) Minister for Human Services the Hon Jacquie Petrusma MP and her Chief of Staff, Suzie Jacobson. 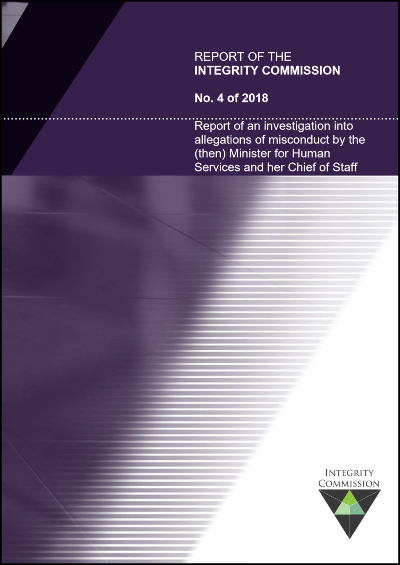 On 7 June 2017, the Integrity Commission received a complaint in a letter from the Hon Josh Willie MLC. On the same day Mr Willie announced in Parliament that he had made a ‘referral’ to the Commission about his concerns. Mr Willie clarified aspects of his complaint by using the Commission’s online complaint form on 19 June 2017.

In the complaint, Mr Willie alleged that a member of staff from the office of, at the time, the Minister for Human Services the Hon Jacquie Petrusma MP (the Minister) had directed the Commissioner for Children and Young People (the Commissioner) by email to cease putting sensitive information to the Minister in writing.

Mr Willie suggested that, if true, this might constitute an offence under s 23 of the Commissioner for Children and Young People Act 2016 (the CCYP Act). It may also have constituted a breach of the relevant employment conditions for the staff member.

This investigation was significant as it explored the nature of the relationship between a statutory officer and the relevant portfolio Minister and the Minister’s staff.

Three further allegations that emerged during the investigation related to the conduct of Ms Jacobson in meetings with the Commissioner. The Commission formed the view that the ‘Ministerial Staff Conduct’ conditions that form part of employment agreements for all Ministerial staff is a code of conduct for the purposes of the Integrity Commission Act 2009 (the IC Act). However, the Commission found that Ms Jacobson’s conduct, whilst robust, was not intended to be disrespectful in nature, notwithstanding that the Commissioner perceived it as such.

Four other allegations that emerged concerned two separate instances allegedly involving the Minister. Evidence given to the Commission during the course of the investigation raised the possibility that the Minister may have sought to enlist the Commissioner’s support in a partisan way.

The Commission found that in both instances the facts did not support a conclusion that the Minister so acted.

In one instance, it was apparent that the Minister’s actions arose from her genuine concerns about the impact of public discourse on out of home care children and young people, and although she was partially influenced by the political and media pressure at that time, the actions were not improper in the circumstances. In the other instance, it was found that the Minister did not make the alleged request.

The Commission, in light of all of the circumstances listed above, determined to dismiss the complaint.