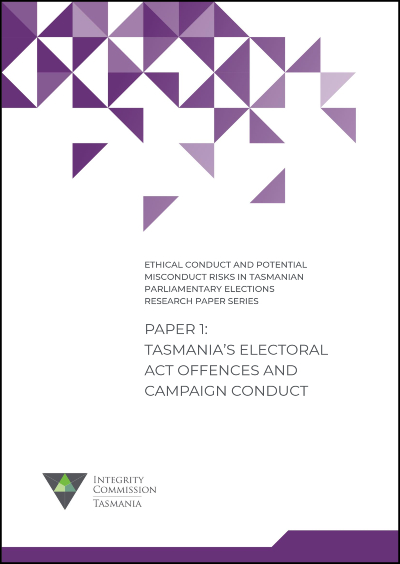 This is the first paper in the series. This paper is about whether and how we should deal with the practice of ‘indirect electoral bribery’ – colloquially known as ‘pork-barrelling’ – in Tasmanian parliamentary elections.

As traditional vote buying has become less culturally acceptable or effective, in many parts of the world electoral candidates have moved towards a more indirect form of electoral bribery. Modern commentary around elections frequently refers to commitments made by candidates as ‘bribery’. This indirect electoral bribery is the promise or giving of a benefit to a small or localised group of electors to ‘buy’ their vote. Academic commentators have also referred to it as ‘metaphorical electoral bribery’ and ‘wholesale electoral bribery’.

Indirect electoral bribery is rarely criminal, and would not usually amount to misconduct. Nonetheless, it poses a significant threat to public confidence in government. It is also questionable conduct from an ethical perspective, if not a legal one.

Closely related to this issue is the process of making individual small-scale grant commitments during an election campaign period, which we intend to deal with in a subsequent paper.

The Commission has educative, preventative and advisory functions to assist public authorities to manage and deal with misconduct.