An investigation into allegations of fabrication and misrepresentation of evidence, and the failure to manage a conflict of interest, in relation to the Fox Free Taskforce and Fox Eradication Program. This investigation arose from a complaint made by the Hon Ivan Dean MLC in October 2016. It followed an earlier complaint by Mr Dean to Tasmania Police regarding potential criminal conduct.

The complaint to the Commission alleged that employees of the Fox Free Taskforce (2002–2006) and Fox Eradication Program (2007–2011), or from the administering department (Department of Primary Industries, Water and Environment (DPIWE)) fabricated or falsified, or knowingly misrepresented (including by omission), evidence of foxes living in Tasmania in order to ensure the ongoing funding and continuation of the fox programs. The allegations, if proven, could amount to a breach of the code of conduct provided in the State Service Act 2000.

The complaint also alleged that the (then) Minister for Primary Industries, Water and the Environment, the Hon David Llewellyn MP, failed to manage a conflict of interest given he was at the time also Minister for Police and Emergency Management. It was alleged that the Minister improperly favoured DPIWE concerns about the existence of foxes in Tasmania over evidence to the contrary obtained in a police investigation carried out in 2001.

An own-motion investigation into the management of misconduct in the Tasmanian public sector. 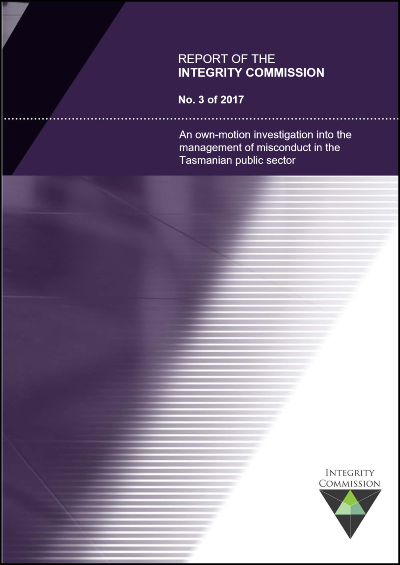 This is a report about an own-motion investigation by the Integrity Commission (the Commission) into the policies, practices and procedures of Tasmanian public sector organisations in managing misconduct allegations. It is the first public sector wide survey of this nature. The survey has found areas of good practice, and those where improvements are needed to ensure that consistent, effective management of misconduct occurs.

Under section 3(3)(b) of the Integrity Commission Act 2009 (Tas), one of the ways in which the Commission is to achieve its principal objectives is by ‘assisting public authorities [to] deal with misconduct’. The aim of this investigation was to gain an understanding of the capacity of public sector organisations to deal with misconduct, so that effective resources and training could be developed to support improved standards.

To achieve this aim, the Commission chose to look at a cross-section of organisations in its jurisdiction. This included five state service agencies, five local government councils, and two other bodies. The organisations were selected so as to provide a representative snapshot across the state. The Commission is grateful for the active participation and cooperation of these organisations.

The Commission engaged with contact officers in each organisation at various stages of the investigation. This included meetings to discuss the investigation in the early stages, sending the survey questions out for comment, preliminary feedback meetings, and asking for feedback on the good practice material. The Commission also invited a number of other bodies to provide feedback on the good practice material.

The investigation has significantly enhanced the Commission’s understanding of how misconduct is handled in Tasmania. It provides an essential foundation for the Commission and the public sector to work on improvements.

The Commission has made three recommendations and five good practice suggestions as part of this investigation. Additionally, it has produced an extensive good practice guide, and will be undertaking associated training, to assist Tasmanian public sector organisations.

An investigation undertaken into a complaint of an alleged conflict of interest against senior executive officers of TasTAFE. This is a report of an investigation undertaken by the Integrity Commission arising from a complaint made to it in February 2016. The complaint alleged that the Chief Executive Officer of TasTAFE, Stephen Conway, provided favourable treatment to his friend Lori Hocking, a senior executive at TasTAFE.

In particular, it was alleged that, as a result of Mr Conway’s conduct, Ms Hocking was the beneficiary of a series of promotions and ‘extremely generous working arrangements’ that occurred without due process.

The investigation of the complaint has identified evidence to support the allegations, with possible favouritism being manifest in Ms Hocking’s progression from a base salary of $121,318 to $176,167 in approximately 12 months. Additionally, the investigation has identified Mr Conway’s provision to Ms Hocking of an ‘incentive payment scheme’ worth approximately $30,000 in benefits beyond Ms Hocking’s contractual entitlements.

The commitments made by Mr Conway included payment for regular flights between Hobart and Adelaide for Ms Hocking to visit her family, payment of Ms Hocking’s rental accommodation in Hobart, and a $6,000 ‘bonus’ on each anniversary of Ms Hocking’s appointment.

The investigation identified no other staff member of TasTAFE who has been the beneficiary of similar treatment.

Evidence obtained in the course of the investigation indicates that this kind of behaviour has extended to the procurement of consultancy services, in which a contract worth $18,000 was awarded to the Chair of the VETNetwork Australia Board, Person J. A friend of Mr Conway and Ms Hocking, Person J was approached directly; this eliminated opportunities for a competitive process and consequently any opportunity for Tasmanian providers to deliver the same services.

The complainant suggests that Ms Hocking has adopted Mr Conway’s practice of favouring certain individuals. This allegation is supported by evidence that Ms Hocking, while responsible for establishing the recruitment process for a senior management role in TasTAFE, reviewed and edited the application of another friend of hers from VETNetwork Australia for that position.

During the Commission’s assessment of the complaint, additional allegations of potential misconduct were identified and investigated.