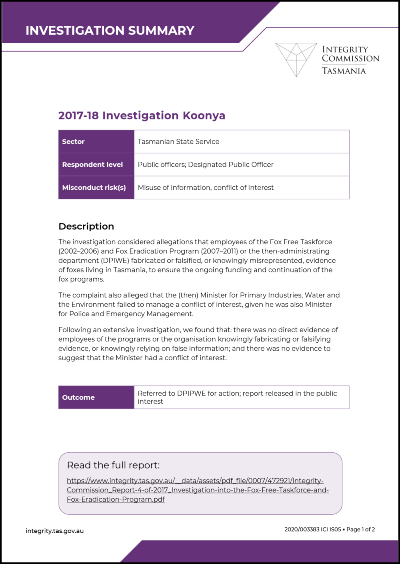 The investigation considered allegations that employees of the Fox Free Taskforce (2002–2006) and Fox Eradication Program (2007–2011) or the then-administrating department (DPIWE) fabricated or falsified, or knowingly misrepresented, evidence of foxes living in Tasmania, to ensure the ongoing funding and continuation of the fox programs.

The complaint also alleged that the (then) Minister for Primary Industries, Water and the Environment failed to manage a conflict of interest, given he was also Minister for Police and Emergency Management.

Following an extensive investigation, we found that: there was no direct evidence of employees of the programs or the organisation knowingly fabricating or falsifying evidence, or knowingly relying on false information; and there was no evidence to suggest that the Minister had a conflict of interest.

Investigation into the Fox Free Taskforce and Fox Eradication Program.