An own-motion investigation into an alleged conflict of interest and improper use of position by a manager in the Department of Education. 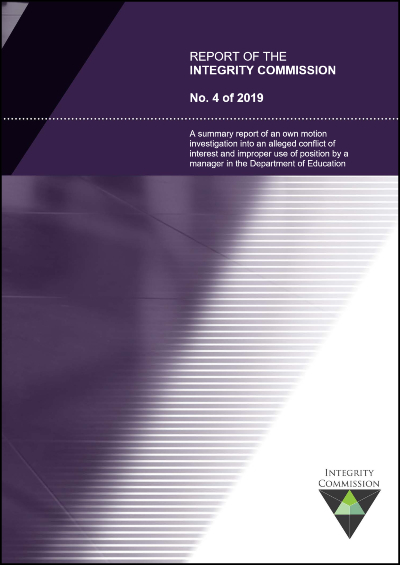 This is a summary of the Board of the Integrity Commission's report of an own motion investigation commenced on 30 April 2018. The matter relates to allegations that a manager in the Department of Education ('the Department') improperly awarded contracts for the production of digital education resources to companies associated with his friend.

The investigation followed an earlier complaint to the Commission in September 2017, which was not investigated given the Department had commenced proceedings against the manager under Employment Direction No 5 ('ED 5') for a similar complaint In April 2018, representatives of the Department sought the Commission's assistance to progress the matter, given they were experiencing difficulty in doing so.

The Commission subsequently investigated the complaint to determine the factual basis for any misconduct, as defined in the Integrity Commission Act 2009 (the IC Act).

The Board considered the investigator's report and determined to refer the complaint and the investigation report to the Secretary of the Department, for action. The Board then finalised this summary of the report, that it considered suitable for tabling in both Houses of Parliament

In presenting the summary, it is noted that the products resulting from the contracts are acknowledged to be of a high quality, meet their intended purpose very well, and are of benefit to the State.

For this summary, the Board has not reproduced all the detailed evidence outlined in the investigator's report, upon which it relied in coming to its conclusions. It has also anonymised or redacted that report, where the Board considered that it was in the public interest to do so. The principal factors which the Board had regard to in determining the format of this report are:

An investigation into alleged conflicts of interest within the Board of Tourism Tasmania.

The Commission investigated the complaint to determine the factual basis for any misconduct, as defined in the Integrity Commission Act 2009 (the IC Act).

The Board considered the investigator’s report and determined to dismiss the complaint. The Board then finalised a version of the report that it considered suitable for tabling in both Houses of Parliament. The Board has redacted or modified some sections where it considered that it was in the public interest to do so.

An investigation into alleged misconduct by the Hon Michael Ferguson MP and the Hon William Hodgman MP, in  relation to Cricket Australia employee, Angela Williamson. This is a summary report of an investigation undertaken by the Integrity Commission arising from a complaint received in August 2018.

The complaint contained allegations of misconduct against the Hon Michael Ferguson MP, Minister for Health, and possibly other senior Government members. The complainant alleged that Mr Ferguson may have released private information about an employee of Cricket Australia, Angela Williamson, and that Ms Williamson’s employment was terminated because of Government influence.

The investigation involved the use of the Commission’s coercive powers, including collecting information from three witnesses by:

At the completion of the investigation, the investigator’s draft report was sent to Mr Ferguson, Mr Hodgman and all three witnesses for comment. The same persons were also provided an opportunity to comment on the recommendations of the Commission’s Chief Executive Officer to the Commission’s Board, and on this summary report.

The investigator found that, on the balance of probabilities, the allegations against Mr Ferguson and Mr Hodgman were not substantiated. Instead, it was found that Cricket Tasmania’s withdrawal of support for Ms Williamson, which led to her employment termination, was a decision made without active and intentional Government involvement.

The Board of the Commission subsequently determined that the matter should be dismissed. The Board also determined that it is in the public interest that a summary of the investigator’s report be tabled in both Houses of Parliament, in accordance with section 11(3) of the Integrity Commission Act 2009. This is a summary report of an assessment undertaken by the Integrity Commission arising from a complaint received in November 2018. The complaint made allegations of misconduct relating to a personal relationship that developed between the Hon Sarah Courtney MP (as then Minister for Primary Industries and Water, and Minister for Racing) and the Secretary of the Department of Primary Industries, Parks, Water and Environment, Dr John Whittington.

An assessment is a fact finding exercise to better understand a complaint and to determine whether it ought to be investigated by the Commission or, in some instances, whether it is better dealt with by another organisation. An assessor may exercise the powers of an investigator to obtain information to help us make this decision, however will usually rely upon information that is provided by a relevant public department, or that is otherwise publicly available.

On completion of an assessment, the assessor is required to prepare and forward a report to the Commission’s Chief Executive Officer in accordance with section 37(1) of the Integrity Commission Act 2009 (‘the IC Act’). The report is to contain a recommendation that the complaint:

In making the recommendation the assessor may consider any or all of the following:

In this instance, the assessor’s recommendation was that the matter be dismissed and this was ultimately the determination of the Chief Executive Officer, in accordance with s 38(1)(a) of the IC Act.

The Board of the Commission subsequently determined that it is in the public interest that a summary of the report be tabled in both Houses of Parliament, in accordance with s 11(3) of the IC Act.